The Dedication of our Cathedral 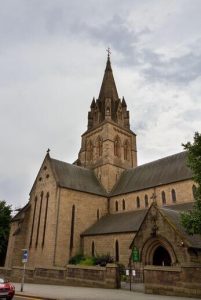 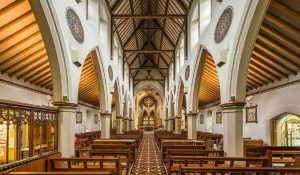 Nottingham Cathedral (the Cathedral Church of St Barnabas) was designed and built under renowned architect A.W.N. Pugin and the foundation stone was laid by Bishop Nicholas Wiseman in 1842, who had brought with him the relics of Saint Barnbas from Rome. At the time of its opening in 1844, the Cathedral was the largest Catholic church to have been built in England since the Reformation.

The Cathedral is the Mother Church of the Catholic Diocese of Nottingham which covers the counties of Nottinghamshire, Leicestershire, Derbyshire, Lincolnshire and Rutland.

Prior to 1844 the Church of St. John the Evangelist, on George Street, had been the home to Nottingham’s ever growing band of Catholics. This growth in the population, prompted the then Parish Priest, Fr. Robert Willson, to set out to raise funds for a larger Church.

Lord Shrewsbury, a champion of the Gothic Revival, stepped forward with financial support and employed A.W.N. Pugin as architect.

The Blessed Sacrament Chapel is considered by many to be the ‘jewel in the crown’ of St. Barnabas Cathedral. It is richly decorated as Pugin had originally intended and is the very heart of the Cathedral. In addition to being used for private prayer, the Chapel is also the centrepiece for more organised group prayer, such as that for Vocations on a Saturday morning.

Our Lady of Lourdes Gallery