Skip to content
Home/Saint of the Day/December/St. Ralph Sherwin
Previous Next 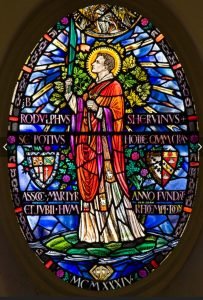 Saint Ralph Sherwin was born at Rodsley, Derbyshire (19 October 1550), and was educated at Eton College. He was a talented classical scholar and was nominated by Sir William Petre from Ingatestone to one of the eight fellowships which he had founded at Exeter College, Oxford. He graduated in 1574, being then accounted “an acute philosopher and an excellent Grecian and Hebrician.” The following year he became a Catholic and fled abroad to the English College at Douai, where he was ordained a priest in 1577. He left to go to the English College in Rome, where he studied for about three years.

In April 1580, Sherwin and thirteen companions (including Edmund Campion and Robert Persons) left Rome for England; a few months later he was arrested while preaching in a private house in London and imprisoned in the Marshalsea prison, where he converted many fellow prisoners. After a month he was removed to the Tower of London, where he was twice tortured on the rack and then laid out in the snow. He is said to have been offered a bishopric by Queen Elizabeth if he would abandon his Catholicism, but refused.

After spending a year in prison he was finally brought to trial with Edmund Campion and others on a charge of treasonable conspiracy. He denied this with the comment: “The plain reason of our standing here is religion, not treason.” He was convicted in Westminster Hall on 20 November 1581. Eleven days later he was taken to Tyburn on a hurdle along with Alexander Briant, where he was hanged, drawn and quartered today, 1st December in 1581. His last words were Jesu, Jesu, Jesu, esto mihi Jesus! He was the first member of the English College in Rome to be martyred.

This beautiful stained glass window of the saint is in the English College in Rome.