Skip to content
Home/Saint of the Day/July/Saints Martha, Mary, and Lazarus
Previous Next 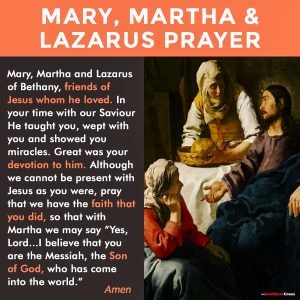 Saint Martha is a Patron Saint of:

Saints Martha, Mary, and Lazarus are Patron Saints of:

Martha, Mary, and their brother Lazarus were evidently close friends of Jesus. He came to their home simply as a welcomed guest, rather than as one celebrating the conversion of a sinner like Zacchaeus or one unceremoniously received by a suspicious Pharisee. The sisters felt free to call on Jesus at their brother’s death, even though a return to Judea at that time seemed to spell almost certain death.

Martha’s great glory is her simple and strong statement of faith in Jesus after her brother’s death. “Jesus told her, ‘I am the resurrection and the life; whoever believes in me, even if he dies, will live, and everyone who lives and believes in me will never die. Do you believe this?’ She said to him, ‘Yes, Lord. I have come to believe that you are the Messiah, the Son of God, the one who is coming into the world’” (John 11:25-27).

No doubt Martha was an active sort of person. On one occasion, she prepares the meal for Jesus and possibly his fellow guests and forthrightly states the obvious: All hands should pitch in to help with the dinner. The Lord recognizes that Martha is “worried about many things,” also noting that Mary, who has spent the preparation time at Jesus’ feet listening to his words “has chosen the better part.” John 12:1-8 describes Mary’s anointing of Jesus’ feet at Bethany, an act which he praised highly.

Immediately after we are told that the chief priests plotted to kill Lazarus “because many of the Jews were turning away and believing in Jesus because of him.” Lazarus was the one of whom the Jews said, “See how much he loved him.” In their sight Jesus raised his friend Lazarus from the dead.

Legends abound about the life of Lazarus after the death and resurrection of Jesus. He is supposed to have left a written account of what he saw in the next world before he was called back to life. Some say he followed Peter into Syria. Another story is that despite being put into a leaking boat by the Jews at Jaffa, he, his sisters, and others landed safely in Cyprus. There he died peacefully after serving as bishop for 30 years.

It is certain there was early devotion to the saint. Around the year 390, the pilgrim lady Etheria talks of the procession that took place on the Saturday before Palm Sunday at the tomb where Lazarus had been raised from the dead. In the West, Passion Sunday was called Dominica de Lazaro, and Augustine tells us that in Africa the Gospel of the raising of Lazarus was read at the office of Palm Sunday.

In its 2021 decree on combining veneration of Mary and Lazarus with Martha, the Congregation for Divine Worship and the Sacraments said, “In the household of Bethany, the Lord Jesus experienced the family spirit and friendship of Martha, Mary and Lazarus, and for this reason the Gospel of John states that he loved them. Martha generously offered him hospitality, Mary listened attentively to his words and Lazarus promptly emerged from the tomb at the command of the one who humiliated death.”

Our Lady of Lourdes Gallery